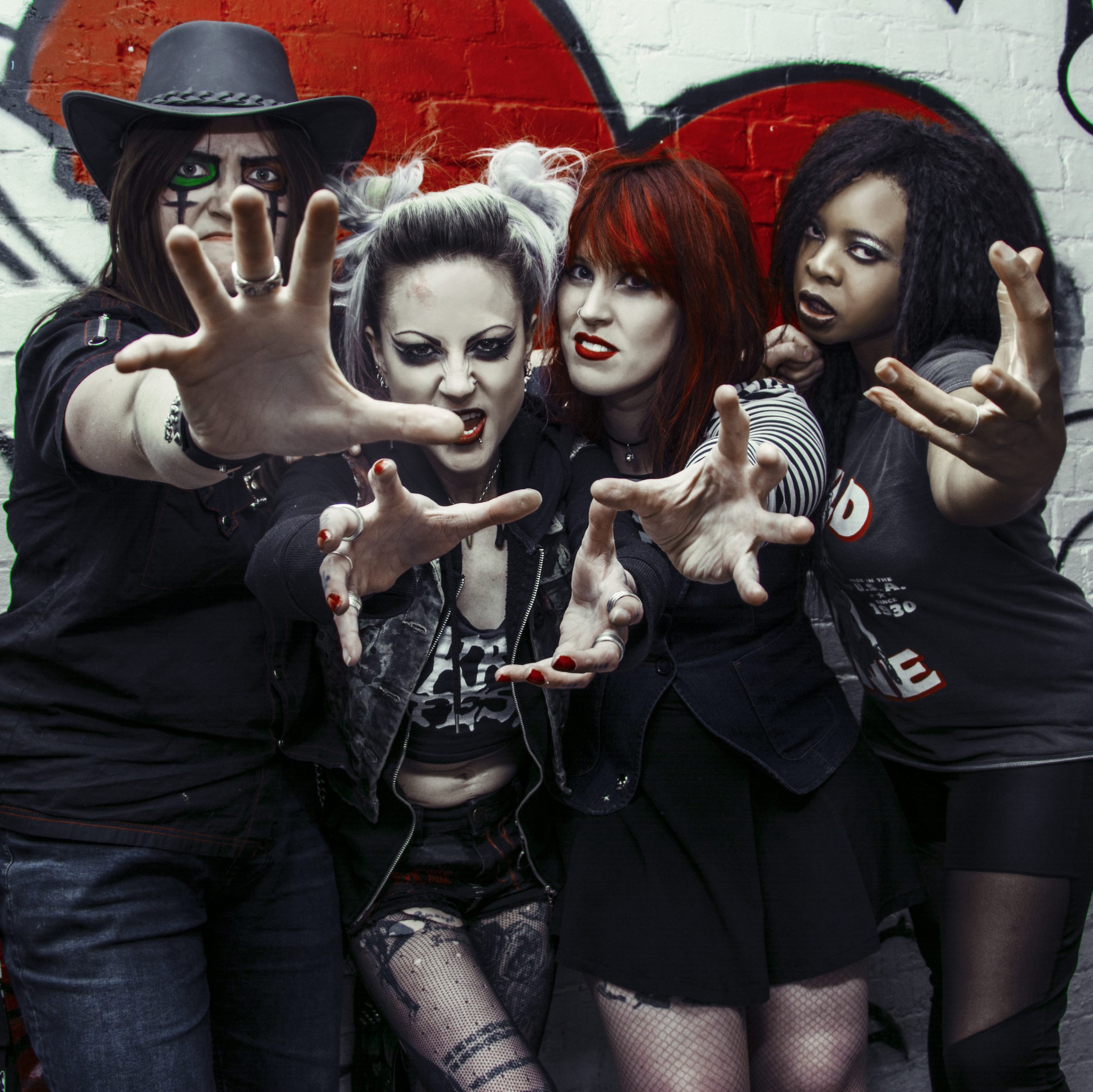 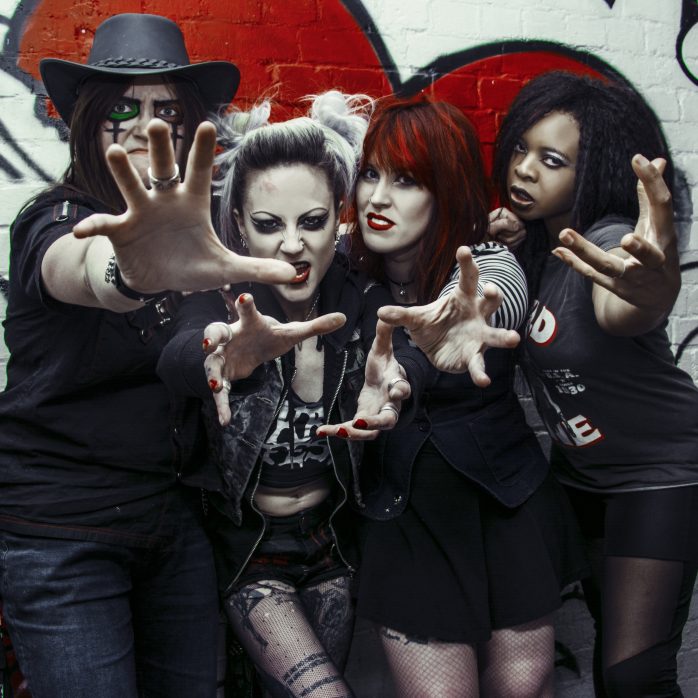 This month we are bringing you Lady Rage.

Lady Rage is a band like no other. Vocalist Siren Sycho was born to lead and scream down any
opposition, guitarist aBomb who can captivate any crowd with her musical wilds, bassist
Emilala was born with fingers made by God but trained by the Devil, and Dee Chi Manic can
thrash and beat a drum kit to near death.
Their riot grrrl esc sound is spliced with aggressive punk riffs, grungy undertones, and rocky
beats to create the perfect blend of genres. There’s a wide range of influences in the
background; Lady Rage takes their musical cues from the obvious choices such as L7, The
Runaways, Motörhead, The Donnas, Black Sabbath, and The Clash, to the more unexpected
ones such as McFly, Primus, My Chemical Romance, 6ix9ine, Within Temptation & Rammstein.
Their energetic live shows also display the band’s rock and roll attitude influenced by the likes
of Johnny Thunders, Nikki Sixx, David Bowie, Al Jourgensen, and Iggy Pop.
They’ve played all over England, including a Northern tour last year in cities such as
Manchester, Rotherham, Newcastle & Shrewsbury, and they are set to support GBH & Days &
Daze in two separate South London shows in the coming months, as well as making their
Rebellion Festival debut later this year.
They’re ready to break through the ever-growing ordinary, the simplistic, the popular, the
meaningless cascade of artists and burn the strings of the puppeteers working behind every
money-hungry entertainer monopolizing the music industry today. These chicks equal trouble.

What is your musical background and how did this lead to you creating the band? Siren Sycho:

I’ve been into alternative music since 13 & that’s down to my dad.

He used to play loads of rock/punk/metal bands in the bars he owned plus he was also a lead singer in a rock band called Fusion Farm in the 70s so I naturally followed musically in that direction.

The music that’s inspired me or that I’m into or been into over the years are Johnny Thunders & The Heartbreakers, Ministry, Amen, Mötley Crüe, The Prodigy, Black Flag, Bad Brains, Minor Threat, Amyl And The Sniffers, Star Fucking Hipsters & Left Over Crack.

So between dad’s inspiration & listening to those bands lead I into starting/joined bands (around 7 of them) over the years & after the last band, I then wanted to create an all chick punk rock band. A few months later, it was happening.

When I was 6, I was bitten by a radio-active guitar at a Spice Girls concert. At that moment, I was suddenly gifted with incredible superhuman guitar skills and an understanding of what I was put on this earth to do; I knew I had to find my sisters in music wearing spiked high-heels and create a band that would rock the world so hard that we’d cause all the continents to shift back into one land-mass. (We’re still working on the latter part of that.)

I only started learning the bass in mid-2020 because I wanted to use the lockdown time to learn a new skill, and I never got the chance to learn an instrument in school. I’ve known Alice for years and that’s how I found out about lady rage they needed a new bassist in 2021.

I’m predominantly a rhythm girl, I play both drums and bass in various bands. Bass is my first instrument, my first love.

what local scene? I moved out of London now so my local scene is nonexistent but if I’m talking about London, I guess the gigs where people are having a good time, where they move to the music & don’t care how cool they’re looking. So many fake ass posers out there these days.

I love the genuine sense of community with other bands and the people on it. It doesn’t feel so much as if you’re “just a gig,” but more that you’re a party with all your friends and the world’s best DJ!

The fact that everyone knows each other is pretty nice. Dee Chi Manic:

I mostly enjoy traveling to different countries through touring and meeting interesting people.

A lot. For example, Nina from Healthy Junkies has been a huge help by putting us on Festival lineups she’s organized or by supporting her band at their gigs. Certain promoters like Steve Illes too as he’s got us several gigs & put us on a tour that was mainly up North last year. Also, another guy called Matt Salters who’s starting to help a great deal with the band.

It’s all about supporting each other. You won’t get anywhere being a dickhead who thinks they’re better than everyone else!

We’ve managed to score a lot of gigs supporting people.

There are a good few people on the scene who are music community creators, who give new bands a leg up on tours and festivals which are the real heroes of the music industry and are the warriors that keep the music scene alive, like Steve Iles from IndigoBravo Promotions and Paul Maybin from Rites of Hadda.

What in your eyes, makes your band unique?

Me!! No, seriously I’d say our look, the combination of genres within our music, our entertaining live shows & or though I hate to say it, the fact we are female musicians. We don’t just look good, we can play music damn well too!

The fact that we all come from such different musical backgrounds is a big factor. Lady Rage is born from a bubbling concoction of riot grrl, symphonic metal, old-school punk, and unashamed pop all mixed up in a witches’ cauldron, with the stirring spoon being held by a unicorn.

ME. Joking!       I like the fact the girls are chill with all four of us bringing our style into the

band, so we aren’t wearing the same thing at a gig and we can show our personalities.

Well, we’ve already played a variety of places outside of London, the PMS tour up North we did last year, we have various other dates outside of London this year, we’re playing Rebellion Festival in Blackpool which we’re going to take full advantage of & we are going up North again for 3 dates at the end of the year.

Plus with the power of the internet, we can spread our music throughout the world with a click of a button (or a few clicks). Facebook is mandatory when promoting your brand & its music. You can’t just tour around the country anymore selling CDs & merch, an online presence is extremely important (or though it pains me to say it).

We’re in the middle of a ferocious bidding war between Elon Musk and Richard Brandson over who gets to send us to space to be the first band ever to perform a gig on Mars. I’m super excited, Mars is meant to be a wonderful place to visit and I can’t wait to meet the locals.

Hopefully get a spot on a festival stage at some point. I just want to play at the o2 Academy 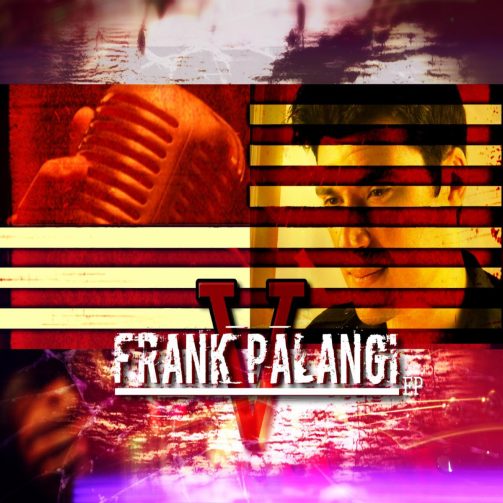