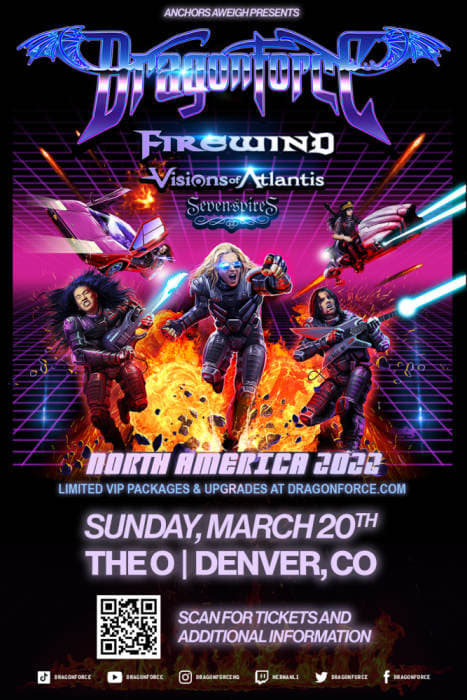 Tonight, marked the return of Dragonforce and Visions of Atlantis to the Oriental Theater. On March 11th, 2020, they both played here, on my wedding anniversary no less. It was their last show before Covid shut down the world. Both bands called attention to this fact, proudly proclaiming that they, the fans, and the Metal community…We. Are. Back!

Full disclosure. I was there primarily to see Seven Spires, although I was pretty psyched about the other bands as well. They made exceptional use of their brief stage time. Adrienne Cowan’s diminutive frame belied her vocal ferocity. She and her bandmates stormed through songs from their last two albums, focusing on their latest release, ‘Gods of Debauchery.’ They wowed the crowd and acquired several new fans along the way. They proved what I have advised for years, always see the opening acts. Trust me, this band is going places.

Next onstage was Visions of Atlantis (VOA) which had more than a few pirate hat adorned devotees in the audience. Co-vocalists Clémentine Delauney and Michele Guaitoli were a formidable duo, each displaying considerably powerful voices. They and the band burst through their brand of Symphonic/Power Metal with the crowd fully engaged. This is a Metal band, yet they never lose sight of the fact Metal is ultimately about having fun.

The big (pleasant) surprise of the evening was the Power Metal quartet Firewind. The veteran outfit lit up the stage and dropped jaws left and right. Vocalist Herbie Langhans displayed an impressive set of pipes while Gus G demonstrated why he is revered as one of the greats. This was especially true with an insane instrumental complete with a (literally) smoking guitar. I overheard someone remark, “I think that’s the guy who played with Ozzy when Zakk left.” Indeed, yes. That Gus G.  The band closed with what Mr. Langhans deemed “a Firewind classic,” Michael Sembelo’s “Maniac.” The Flashdance soundtrack never rocked so hard. Suffice it to say, Firewind completely owned the crowd.

Headliners Dragonforce took the stage amid smoke, fire, and a shower of confetti. They brilliantly played at breakneck speed as only they can and basically never relented. Nestled on a stage adorned with giant video games (with 64-bit graphics!) movie screens, and of course, a giant dragon, they blazed through a good cross-section of new and older songs. Highlights included a metalized country hoedown (yes, really) and their cover of Celine Dion’s “My Heart Will Go On,” complete with a Titanic-sized mosh pit. Their words, not mine. Closing out with “Through the Fire and Flames,” confetti and streamers filled the entire venue, a true spectacle perfectly capping off the evening.

Far more than a concert, this was a celebration. After having two years stolen from us, this was a triumphant return to normal. The next morning, my ears were still ringing and I was more than a bit sore. Still, I can’t wait to do it again.

"After having two years stolen from us, this was a triumphant return to normal" 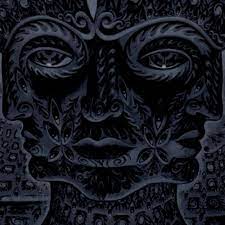