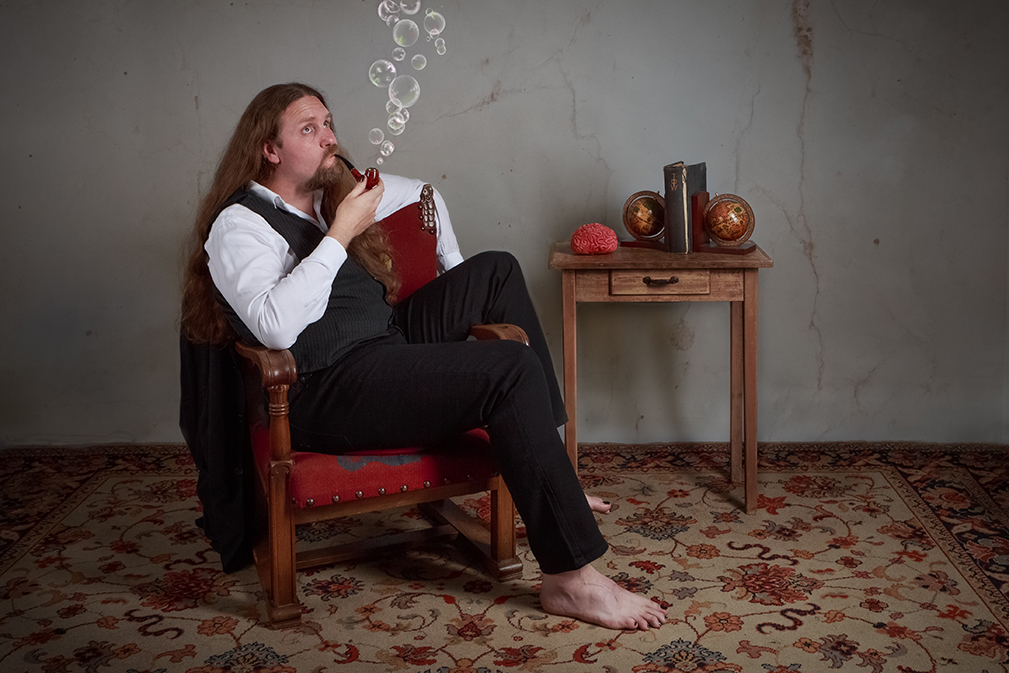 Please introduce the band in the most spontaneous way

Hello! I am not a band! I am TDW though! And I am a solo artist that writes all music, lyrics, scripts and concepts for my own records, songs and videos. I sing the lead vocals, play guitar and synths and arrange everything from orchestra’s to drums to nose flute if need be. I also like long walks to the fridge, cats, and comedy that doesn’t make sense. Next to my serious albums, I write mini songs about subjects most people don’t even think about and post them online to give my fragile ego some form of validity. Also, sarcasm and absurdism are my forte.

That it exists? Haha! (Thanks social media algorithms!)

No, seriously, I think that people have a preconceived thought at the words ‘progressive’ and ‘symphonic’ in metal that my music does not literally fit into. I often get responses from new listeners saying ‘Hey I did not expect your albums to be this diverse’ and such, and I think that is a good thing in general. Better to surprise people with what you do in a positive way than to give them something they will forget after the first listen.

This year I was able to release 2 albums and both ended up on vinyl and being my best selling records with a sense of growth still pervading my career now. I think the fact that I was able to make these records happen even in these ridiculous times is an achievement I will never forget.

The first of the two albums ‘The Days the Clock Stopped’ was my most personal and intense work ever because I speak openly about my hospital experiences and what that did to me. So it personally felt like I was able to give those emotions a place and grow as a person in the process.

The second album, Fountains was released recently and was an album I wrote using fan ideas for new song ideas which was a whole new approach for me. I wrote, produced, and created that record in a timespan of only 6 months total, which is honestly ridiculous as I normally take way longer to release albums.

So I am proud of making both of these and getting those out in such a short timespan really. 2021 was an eventful year, haha!

I gravitate towards the song ‘Lest We Forget’ from the album ‘The Antithetic Affiliation’ a lot. That is a song that works on multiple levels for me lyrically and one that came from a very dark place I was in back in 2016 when it felt like the foundation of my world was completely falling apart at the seams.

Also the lyrics to my album ‘The Days The Clock Stopped’ as a whole stand out to me, as those are less hypothetical/poetic and more of a real reflection of what my life was like when I almost died in the hospital 11 years ago. Those lyrics are rawer and in your face and I can imagine they won’t work for everyone, but I am happy that I was able to express the sense of anger and sadness that I felt then.

I think that might just be my camera haha. Because I often take pics of things I see that can work as inspiration but also use my cam for short video updates for the socials and whatnot. I am happy to say that my Samsung cam has not failed me yet and that is saying a lot considering the amount of content I make with it.

Besides my camera, I am mostly using my phone as a Whatsapp aggregate connected to my PC’s because WhatsApp web is a godsend that at least allows me to type somewhat coherent messages as phone keyboards and my big hands don’t match, haha.

Next to that, I love cycling (I cycle at least 20km daily either in terms of sports or in a relaxed fashion) and I swim once a week. Gotta stay in shape and all that.

I play and collect video games, so I also just love kicking back and playing stuff on one of my consoles at home. Animal Crossing is a big thing for me, but I also love Civiliation 6, Street Fighter alpha 3, Blazblue, Minecraft etc. For me, gaming is one of my oldest passions (started at the NES and own a Switch today)

And in general, I love doing artistic projects for myself like drawing, painting, writing, etc which sometimes bleeds over into my music career but also often just stays in my own private world.

Good question, I think I am more of a number 2 variety in this regard. I dedicate my life to making art in terms of albums etc and I knew from the get-go that sustaining myself on my music alone was not gonna be easy, so I also became a producer and content maker and use that side of myself to make money for rent, groceries etc. That way I can keep my music as honest, direct and weird as I want it to be and not be forced to write something that someone else might like because I could not afford rent otherwise.

Music really is like religion to me and I want to keep that in a similar place to where I put my love for people and the world around me. The moment music turns into a chore that loses its creative spark and beauty, I will instantly quit and never look back. My way of keeping my musical expression valid and fresh is by keeping it exactly as I want to make it in my head with no compromises to the experiments and crazy things I want to do.

My ten-year-old self wanted to be a videogame designer badly, so I think he might be a bit surprised that I have chosen for music full-time. Yet at the same time, my 10-year-old self was raised in a household that blasted Queen, Toto, Pink Floyd, Jesus Christ Superstar and what not on a daily basis and was always singing and writing things down that made complete sense to himself. So I guess in a way, not a lot changed besides the fact that I am now older and more experienced.

I am still that young kid that wants to sing, write, create and think of crazy creative ideas to pursue and I think that the way I am doing my career now, I am keeping that child alive, breathing, and kicking along with me. Often I feel he sits next to me in the studio, singing along and making up nonsensical words when I write the music I do, haha.

Don’t be discouraged if you are not an instant success. This might sound weird, but we live in a world that is obsessed with ‘making it while you are young and everything needing to be perfect at the first try. And well… that is complete BS and an unrealistic standard to be held to.

If you have a first album that is a mega-hit, more power to you! And if you are world-famous at age 18 because your band is THE NEW HOT THING in metal, I absolutely wish you well! But I can guarantee that about 90% of all musicians worldwide will not have such an experience and that does not mean you have failed or are not good enough.

Things that are worth something for real, take time to build and develop properly. It’s like building a house, you don’t start with the roof, you start with a foundation and build it layer for layer until you have a solid place to work from and call home. The same can be said for careers and art that actually last and make an impact on people.

So my simple advice is: keep going and don’t give up!

Absolutely. My music and my art are what keeps me going and keep me feeling creatively fulfilled and happy. I think that without this outlet, my life would not have taken the many beautiful turns it did so far, so in that regard music really means everything.

Yes, the road is a hard one, and yes it’s not always easy to do what I do, but then again… Life isn’t exactly easy either isn’t it?