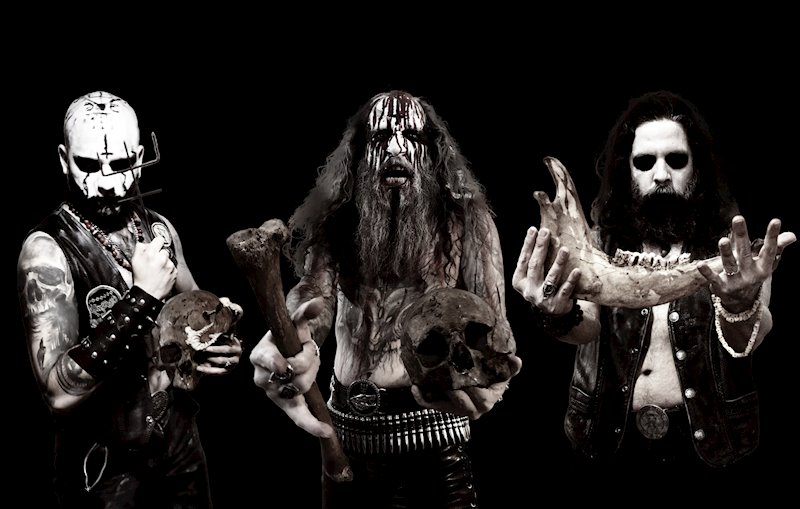 A spiritual voyage with Xalpen

XALPEN is a raw Black Metal manifestation which emerges with real conviction and complete shamanic devotion by channeling ritualistic vibrations within the Black Arts and the Spiritual development. Guided by Ancestral traditions of Ancient occult knowledge, Euphoria, ecstasy, trance and demoniac commitment have taken form between the different hemispheres of the planet. The two Chilean demons: Juan Pablo Núñez (guitar & vocals) and Alvaro Lillo (bass & vocals), manifest and complete the endeavor (All Music & Lyrics) they started back in 2014.

Metal Digest embarked on a spiritual voyage with the band.

Before we hop on this spiritual journey with you, what does one wear for such a spiritual voyage? What’s the dress code?

Hello Chelf, thanks and welcome. You can wear whatever you want according to the needs of any trip ahead, this one is diabolical and full of mysticism. I guess it’s easy to understand the “codes” in a Black Metal act but if I follow the question correctly, the answer for a spiritual voyage shall be: “naked”. What also can be seen or interpreted as a dress code Anyway, feel free to decode as much you can and don’t forget your weapons.

Ok, I’m ready, let’s go. How would you describe the essence of Xalpen?

On the other side, there lies the metamorphic effigy that represents Xalpen; the ancient manifestation, ruler among the seven pillars, mystical and horrific queen of the underworld as told by the legends of ancient shamans from another era.

Musically, the compositions are guided by the connection with the dark essence of Xalpen, it is our bridge through dimensions and spiritual voyage. Satanic Black Metal of Death has been the core of our proposal and there is no other name by which to call what we do in Xalpen.

You recently joined forces with Swedish Metal label BLACK LODGE/Sound Pollution. Congratulations! Is this the first time you’re working with a label?

Thanks, we have good work ahead with Black Lodge/Sound Pollution and we believe it is going to make us more and more busy this upcoming time developing and setting Xalpen on a spot of interest for the ones who dive in the dark waters of demonic rejoice.

In the past, we have also worked with Morbid Skull Records from El Salvador. They released our Ep´s and demo, and a co-production with Van Records for a vinyl 7” split with our brother in Škan (USA).

Another past collaboration was with Nigredo Records (Sweden) for a limited tape edition of Sawken Xo´on. Recently we were part of a new split cd with Futhan (Chile), produced by Kulto 13 and the bands involved.

As a result, you are now ready to build some concrete plans for the band. What does that entail? Should we expect a tour?

First of all, Black Lodge released a remastered version of our first album “Sawken Xo´on”. We are also waiting for regulations and border restrictions to be removed for travel from Chile to Sweden to be possible in order to begin recording the new album.  After this, we will see how this pandemic world will be, in regard to know where and what can be the best course of action on Xalpen´s path for the future.

A tour is well expected, We are certain of that.

If you could only choose one: vinyl, cassette tape, cd, what would you choose?

Vinyl I guess…not an issue but better not to choose just one. I normally listen to all 3 formats you mentioned above, even if some tapes versions are pure gold!

Black and death metal have always been very connected to spirituality and transcendence. How do you explain that?

It is well experienced and known that the magical and extreme frequencies of the abyss rejoice us. Its presence is when and where our demons scream in ecstasy and dance over the cursed melodies, when and where all is possessed by the trance of a deadly drumming and infernal vociferations, transcendent, through flesh and the realms of Death, the connection to the great spirits and the chain breaking moment that music carries, it is there in the traces of our own spawn and extinction.

Your music unveils ritualistic vibes connected to the Black Arts. Is your real-life like that or it’s just a part of your artistic personas?

It is in this moment when we can connect our flesh with our spirit and freely decide for our acts until the great Mother takes us. In this short lapse of existence, we make sure to reject mundanity and the dirt of the human arrogance; be genuine, develop art and knowledge, respect the rites, and you will feel the vibes that only the acts of pure black arts can bring to ourselves. It is part of a constant purge between life and Death.

Our music is adorned with the sacrifices and myths of a long-forgotten era of shamans from the very south of the globe as we know it today. We have the utmost respect for what we do and the connection with the black arts creates our dark and chaotic path as Xalpen.

What kind of chaotic forces led you to create the masterpiece that is Sawken Xo On?

Always it has been the energies of Xalpen, in different aspects and different moments in times. To enter her realms, first you must fear and face her and the signs that follow. For example, the legend or mythical passage of the 3 Shamans (Sawken Xo´on) that sailed away in a spiritual trip beyond the 4 angles of this world, to connected with the great energy of Xalpen in a desperate way, after a long time that She has been away, lurking among the pillars of Death, in the realms beneath and above the 7 skies, far from the grace of any god, not seen by shamans since the time the sun (Kren) intended to murder the moon (Kre´) and all her daughters. Only Xalpen and her malicious messengers could approach the malediction that will once again erase any traces of men, their heritage, and progeny.

Selk´nam people praise and gave sacrifices to Her, Haush people praised and ceased Her appetite, Yagan people praised and calmed Her thirst, and Xalpen arose once again under 7 names and in 7 terrible shapes (depending on ethnical or/and linguistic aspects of every group the legend is told alike), returning the nights over the fields of the livings. She healed the survival moon-women, also reinforcing the bonds with the nightside emanations as her own. Ceremonies of blood, forces from unknown planes demanding devotional sacrifices, metamorphic, an entire ocean of obscurity and mysteries about the spiritual aspects of Xalpen.

For this album we understand every song as different theme, some are directly connected to another but the 7 songs that fill the LP are more like independent to each other, but under the same mythic and spiritual concept obviously. Also, an important element came as a significant work with and within the nameless forces that led to any alchemical process, we recorded some chants accordingly, to honor the dark gods and complement the charge of a very special and unique talisman, black mirror, amulet or magical weapon, you can name it as you wish. This medallion or magic tool is handcraft made by pure silver and consist in two dragons biting each other’s tale, forming a constant and dual movement of devouring and transform energies, the elements and dimensions has been treated as the spirits has spoken, held by the dragon´s claws is an obsidian stone to project, reject or attack. The way to charge it and get ready to use it or even get one piece are briefly exposed and explained at our Bandcamp , site, on the material called “T´oón ny T´éen” (Beyond Darkness).

What’s your creative process like? Do you get together to jam often?

No jamming, we meet when the moment requires us to. Our processes consist of moving the creativity from one hemisphere to another, covering all aspects and foundations of our cult.

Time is never an ally in our work, nor is physical distance. We have many ideas, home demos, and personal ways to manifest the chapters of the band´s history. Xalpen has performed only once as a live ritual concert. It was in a small venue in Talca-Chile some years back. Last year we had in mind to organize a mini tour in USA and Europe but everything got canceled and just never happened. Regardless, we have found and solved the way to experiment and better express the musical, spiritual, and personal growth process within Xalpen. That keeps us in a constant creative state and standing firmly, ready for the challenges ahead.

Besides doing promo for the album are you working on anything else at the moment?

We, the different and individual maniacs around Xalpen yes. We have work and other responsibilities to attend to, but there is nothing that can negatively affect or minimize our conviction to build up this dark manifestation called Xalpen, through the chaotic and shamanic bridge that blasphemous Black Metal creates. The next step is the recording of a second album during these times of Death and plague.

Under the name of “Sawken Xo´on” (“3 Shamans” translated from Selk´nam language) the material formed what it is the Xalpen´s first full-length Studio Album. Consisting of 7 aggressive Shamanic Black Metal tracks: 1- Devourer of Light (Ya´alwe Kar-t´en); 2- 1340; 3- Dark Nights of Winter (On Stekenjhio’ joshckek); 4- Han K´win Saik (For those who have departed); 5- Among the Pillars of Death (Han On Outeken Chesk); 6- Tres Chamanes (Sawken Xo´on); 7- The Formidable Fumes of Hell-Fire (On Tohown Tahner On K´ar Xawqekyen). Original version released in a limited cassette edition to 200pcs. (co-work association with Nigredo Records-Sweden), a CD edition (co-work association with Morbid Skull Records-El Salvador) and reissued on vinyl, CD and digital by Black Lodge/Sound pollution-Sweden. 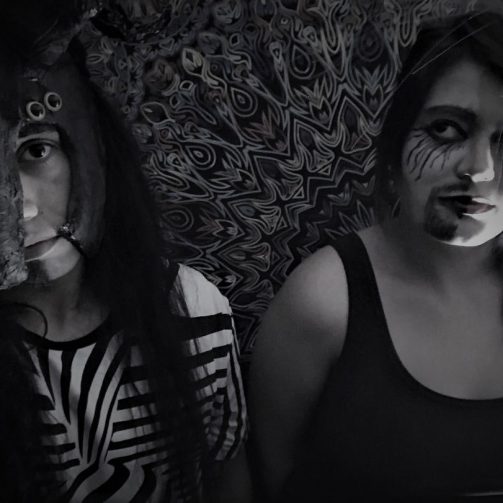