This was the ardent wish of thousands of fans calling out to Andi Deris, Michael Kiske,

the PUMPKINS UNITED WORLD TOUR – and their dream has come true! With the

Metal Digest had a chat with the band about their upcoming album, the band’s history and the new chapter of Helloween.

Congratulations on the new album! We are counting down the days until June 18th. A new chapter for your career. What’s something you want to achieve this time, that you’ve never done before?

I think we are just normal musicians. We are not recording to achieve something special except bringing our music out and hope that the fans will like it as well.  Just to continue, being healthy and able to indulge in what we do best – making music. We are excited, too in releasing this new album opening a new chapter on Helloween.

Fascinated by the different character traits and facets of the HELLOWEEN history, I couldn’t help but wonder: What’s the dynamic like with this unique seven-piece metal alliance today?

We had our experience already during the 14 months of the Pumpkins United tour and it was full of energy. The dynamic comes from seven unique musicians, having all their own ideas but are complete in the end in their views what works for Helloween

Do you have any band traditions or rituals?

No, not really. Each of us concentrates a couple of minutes before the show and on we go

Is it true that you used old school recording engineering from the 80’s to record ‘Helloween’?

It was from the ’90s. And yes, we used the HOME studios where we recorded our 90’s records and worked with analog tape machines

‘Helloween’ is precise time travel through all phases of the band’s history. If you could go back in time, which moments would you choose to relive?

We are all living in the present – we share great memories but that doesn’t mean you want to relive anything.

You are creating music only for yourselves, but for the fans as well. How do you want them to feel when they sit down to listen to this album beginning to end?

Let’s talk about the artwork: It’s a handmade painting Berlin-based artist Eliran Kantor. How did you articulate what you wanted from her? Did you give her complete creative control and how involved were you in the creative process?

Eliran was always a big fan of Helloween. And we wanted him to design something that shows the universe of Helloween. The only specification he had was that it should be a hand painting and somehow circles the Helloween cosmos. He did it on his own and submitted and we took it the way he delivered with no changes.  And we are very happy with the work he did.

On the road since 1984, you toured the world countless times. In fact, you were the first bad I’ve ever seen live. Good times. Any plans to go on a new adventure in the near future?

Yes, dates are booked for next year

Clearly, you have a busy season ahead. If you didn’t have to sleep, how would you spend the additional eight hours?

We are all humans and we have to rest as well – it would be rather superhuman to think about it and would it be productive ?

Thank you for your support! 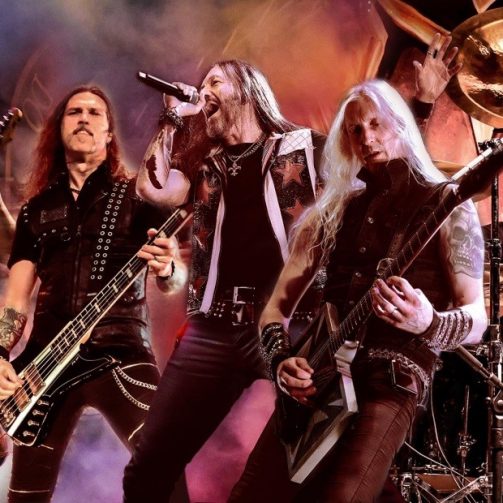