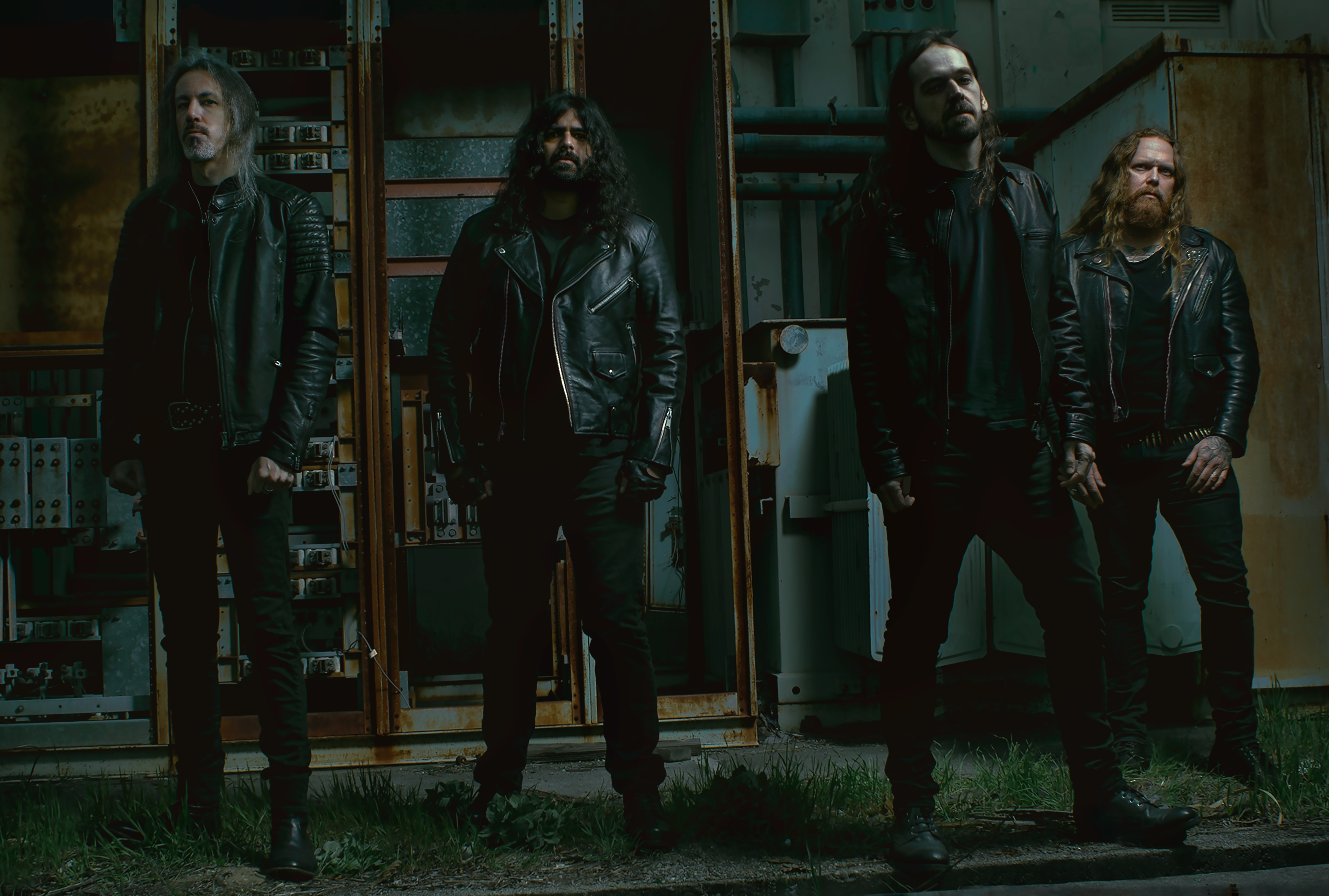 The San Francisco Bay Area has a history steeped in forward-thinking, technically dazzling metal, and NITE carries that torch with pride. Founded in 2018, their blackened heavy metal brand barrels towards the peril of an unknown future, while keeping one eye on the days when blistering leads once ruled the land. Guitarists Van Labrakis (Satan’s Wrath, Mencea) and Scott Hoffman (Dawnbringer, High Spirits) let loose galloping riffs and harmonies that evoke the classic sounds of the N.W.O.B.H.M., with Labrakis’ grizzled voice driving their dark, melodic metal into the modern era.

Metal Digest had a chat with Van Labrakis about their latest endeavours.

NITE is the flame of the past illuminating the darkness of tomorrow. How do you mix the old with the new so seamlessly?

Well, thank you. We try our best. All aspects of our music come naturally and are not forced. This is the kind of heavy metal we all grew up with and is unapologetically true to its origins. For me personally, that’s what made me pick up the guitar in the first place. I don’t have to think about it that much when writing songs other than trying to keep the songs fun and interesting to me. The vocals, which is the twist here, the new element, is also the only type of vocal I can actually conjure. That’s what feels natural to me, doing on top of those riffs, so again it comes naturally. I think not overthinking it and not trying hard to do something we are not is what you are referring to.

You recently signed with Season of Mist. Congratulations! How did that union come together?

Thank you. We are really excited about that one. We had a discussion with them in the past but the timing wasn’t right before our debut. Season of Mist was always the destination in my mind at least, at some point I knew that this would be the right home for NITE. Michael (Berberian) reached out to us in early 2021, everything worked out well and here we are. It’s such a blessing having a label with such great history and experience supporting us. Very excited about what the future holds.

Blackened heavy metal from San Fransisco is the obvious description of the band. But let’s get a bit more creative. How would you describe the band in a single sentence?

If I were to sum it up I would say simply, heavy metal. That’s what I think heavy metal should sound like in 2021. I don’t really think we are blackening anything, I just can’t imagine doing what we do with clean vocals. After the influence black metal and death metal had on the scene for decades, I think that this type of vocal is the norm and the most pleasing sound to my ears. Since I moved to the US a while ago I realized how different the meaning of the term “metal” is here than in Europe. Having grown up in Greece in the 80s and 90s, heavy metal means something very different to me than alternative rock, hardcore, and punk. I’m not against crossovers but it’s just not for me.

To come back to your question though, we play guitar forward, classic heavy metal, paying tribute to the guitar greats of the 80s and 90s in the likes of Steve Vai, Marty Friedman, Jason Becker, Adrian Smith, Dave Murray, Trey Azagthoth, Kai Hansen, etc. while channeling a shadow of Mr. Kilmister and the spirit of the black metal heritage of the Scandinavian greats.

Say we spend a day with the entire band. What should we expect? What’s a typical day in the life with Nite? Is it all work or do we get to play as well?

We are right at what seems to be the end of the pandemic, so life lately has been somewhat… different. Regardless, a typical day starts with practice, guitar practice for me pretty early at around 7 am.

Practicing music is my religion and something I do ever since I was a kid. I love the discipline it takes and the hard-earned rewards.

Moving through the day I integrate vocal warm-ups and setlist practice. I don’t know how easy it looks or not but what I do takes a lot of work. We all have day jobs so a good chunk of the day has to revolve around that of course. My day job is music production and music teaching, so more music there for me. We tend to write a lot of music so demoing pretty much daily is something we do and we usually end the day with either a group Zoom call nowadays or 1on1 Zoom calls between us discussing certain aspects of the band, band tasks, etc. or band practice.

To sum up, we are no fun at all! Haha… It’s been a weird year and we do miss being able to do shows and have this amazing “release” in front of an audience. We just have to put our heads down, do the work, until the world reopens and we can get back on the stage doing what we love the most.

Van, just like me you have a Greek heritage. Do you think that has played an important role in shaping you as an artist and if so in what ways?

Most definitely. The most significant part of it is that I’m an immigrant. Wanting to play heavy metal music, heavy metal guitar, and work in music, it was clear to me from the time I was 15 or so that I had to get out of Greece. Making a living as a musician in Greece would have involved a lot of mainstream Greek music (see bouzouki music) which was not something I was up for, at all. I moved to the UK when I was 19, Germany later on for a good 10 years, and to the US most recently. This urge to work in the field as an engineer, producer, musician, etc. has set me on a trip around the world.

All these wonderful experiences, in very different places, cultures, people, etc. have brought me the realization that everything, everyone, everywhere is the same really, and home is a frame of mind than a destination or a physical location. At the same time not been comfortable, as in not working within walking distance from the house I grew up in, has been a big part of my personal growth. I feel privileged that I was able to make those choices and had the luxury of leaving the place I grew up in but, believe me, it came with a lot of hardships, sacrifices, and a lot of bottom scraping.

There’s a humbling effect in having to eat potatoes and homemade bread for a week for example because you just can’t afford anything else.

I’m sure that things would have been easier if I could just drive to my family’s home and have a proper dinner once in a while back when I was starting up but I wouldn’t be able to do any of the things I’ve done so far by playing it safe.

An interesting part of it is this perpetual “in limbo” effect that I’m experiencing by being too American for my Greek friends and at the same time maybe too Greek for my American friends (and also side note, too guitar player for engineers and too engineer for guitar players…) I think it helps me be who I really am. Since I can’t completely fit in anywhere and camouflage myself in normality, why bother? It’s very liberating.

On the heritage part of it, I think one of the most useful aspects of being Greek, (cue in My Big Fat Greek Wedding kimono quotes here!), is that you get to kind of know what many words mean and where they come from. It’s very helpful for understanding certain aspects of philosophy, certain cultural elements and meanings.

Tough choice ahead: You can only pick one- San Frasisco bay shrimp and a glass of rose or Greek saganaki and a shot of ouzo?

I think that’s an easy saganaki win for me but I’d “accidentally” spill the ouzo.

It’s been a year since your debut album “Darkness Silence Mirror Flame”. Looking back, is there anything that you would have done differently?

Not that much, no. I think if we knew then what we know now, having played the album live for a while, I’d say we would trim the songs down a bit. Not all of them and not by much, just a couple of them could have used some more editing down of parts. But then again that’s a good representation of where we were at the time so I’m still happy and content about it.

Time to brag (well, deserved, if you ask me!) Was there a moment in your career that you felt accomplished?

That time has not come yet for me and I’m not sure if it will ever come. I don’t think I’ve ever felt accomplished but I’ve definitely felt very grateful for things I’ve done, and I have done some amazing things. Things that I couldn’t have even dreamed of when I was a kid, but that’s as far as it goes. Humility is a big part of who I am and also my driving force behind everything I do, getting up every morning, picking up the guitar, 27 years down the line now and still feeling completely humbled staring at a page of music by someone great, like John Petrucci and Marty Friedman or a monster like Bach or Paganini. I mean there’s no room for inflated egos when you are up against something like that. But, ask me again when we headline Wacken one day!

I have a feeling that you probably can’t reveal too much BUT, we’d love a glimpse into the future. What’s your expectations for the upcoming season and what steps are you taking to get there?

That’s right I can’t tell you much but what I can say is that we are in the very final stages of our second album, soon to be released by Season of Mist. We are very proud of what we managed to pull together for this one and very excited to show the world what we’ve been up to. Besides that, we are getting ready to get on stage again once the world reopens, which seems so much closer now, at least in this part of the world. We’ll see you all out there, sooner or later. 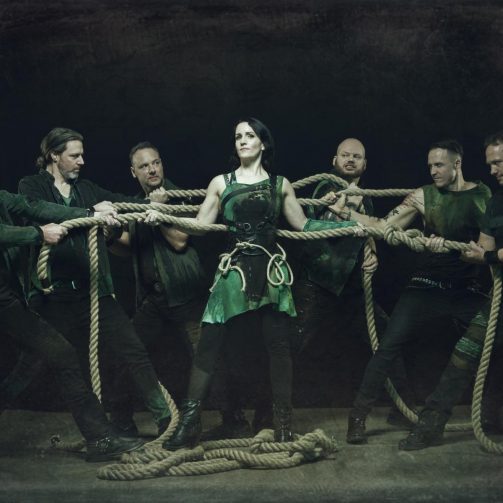