Athens- based metal and folk- infused heavy rock trio, KHIRKI, has announced the release of their awaited first full-length debut album, which will be seeing the light of day this Spring.

Diving deeper into Greek mythology, Κίρκη – pronounced Κírkē  [kírkɛː] – was a sorceress, best known for transforming Odysseus’ crew into animals with her magical wine. Inspired by the mythological enchantress, and after reaping the grapes of the metal and rock culture in the likes of Kvelertak, Mastodon or Tool, KHIRKI has created their very own and original, sweet tasting drink, an essence of finest rock ‘n’ roll, progressive metal spheres and traditional music of their place of origin, ready to be served as Vinyl and Digital formats on May 20th!

The trio’s debut album “Κτηνωδία” ( pronounced: Ktinodia ) features a cohesive set of eight mostly fast- paced, uplifting songs. Its progressive mood is infectious, mesmerizing by the tribal-like dancing chants, “Κτηνωδία” dives deep into an original sound heavily inspired by Anatolian and Balkan folk music. Orchestrated by acoustic and traditional instruments highlight the seducing folk atmosphere; yet “Κτηνωδία” is heavy at heart, a metal record that will crush ears and minds.

But let their sound speak for itself, as the band just shared a first track from the upcoming album! Dive into KHIRKI’s exotic art of metal and listen to Black And Chrome right here:

“Κτηνωδία” was recorded by Theodore Zefkilis at Sca Studios (Rotting Christ, Planet of Zeus) in Athens between Autumn of 2019 and Spring 2020. The album pre-sale is now up at THIS LOCATION! 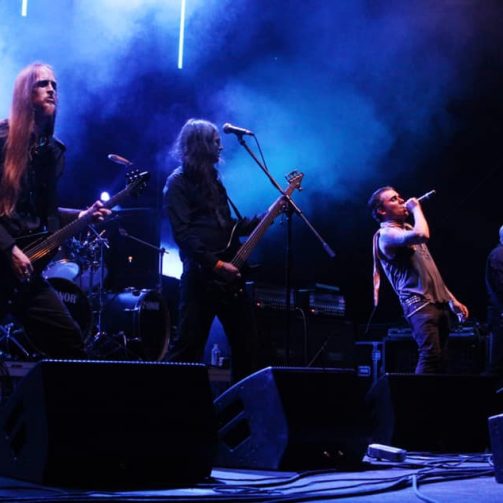